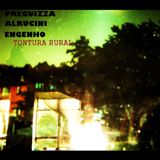 The nature of the spoken words (all in Portuguese) conduct our attention to the subterranean and visionary existentialism, from wild declamations, to sweet readings and improvised poetry of a new generation, openly travelling our mind, with fantastic art, in many forms of expression, to the vertigo of the real world, the mysteries of fantasy and dream, granted by the people involved in this cooperation, that freely used both acoustic/electric instruments and electronics, with no strings attached.

Mainly recorded on three diferent jam sessions and then mixed with diferent audio elements.
The first jam session occured at the Residence of the Faculty of Arts of the University of Porto, it was the first encounter for Xarhope and Minson with Alrucini and they improvised all night long, recording the melodica, the electronics and the guitar untill dawn, when the second jam was predicted for that same day, in the afternoon at the studios of Fábrica-do-Som, where Xarhope, Nemraca and Minson recorded the vocals, the drums and the song "Adoçante" with Alrucini (guitar).
Few days later the third jam session happened at an abandoned pavilion in Coimbra where Xarhope and Minson recorded the drums, the flutes, the didgeridoo, the darbuka and other percussion instruments.

These recordings were a sweet teaser to include the elements that were missing and Out Level answered the call by sending the spoken words and the guitars recorded at his home, in Oliveira do Hospital, to be mixed by Alrucini and Xarhope in the sucessive mixtures including, beside the jam recordings, guitar, drum pad (Alrucini); birds, piano (Xarhope); electronics (Xarhope, Minson, Alrucini); field recordings (Luís Antero) and more spoken words (Xarhope, Minson, Alrucini, Arlete Ferreira).

Reviewer: UFUS - favoritefavoritefavoritefavoritefavorite - May 17, 2010
Subject: meu amor tenho tonturas!
"It's not a turra, I don't deny that some shake in this
head wouldn't calm this molestia of the silence. It's obvious that vossa
excelenia knows what is a turra! So, everyday I go to my terraço and I see myself climbing the stairs to the nuvens where
they make the pencils of cotao, and they say that I cannot take such categorical
pencils just like that, I need to distract them and depois I can only take the
pencils with the point of my feet, which is a big mess because I have to walk
on pé
coxinho what leaves me extremely
exhausted. And soi put myself playing the tontonton and they dance tanto tanto
that all the cotao is in rebolico and it starts to nevar in the briks of my
curral. And so I can rest! I think it's the
tun!.........................Os pastores vieram em
auxílio do resineiro with a box of tools, e na mesma noite que a motorizada was
ready, Manuel put fire to the mountains of jornais do quarto, arrastou-se até ao
trono da motorizada sinfónica and disappeared in the middle of the fog. Os
pastores ficaram a vê-lo afastar-se and wished him good luck. Alguns minutos
depois o fogo gerava grande alvoroço in the litle village, the people were
thinking that Manuel, o resineiro inválido e louco tinha sido carbonizado no
meio das pilhas dos jornais sujos de resina. The single woman vidente
transformed the room carbonizado numa especie de santuário e a estória de
Manuel, the resine man that died carbonized remained in the imaginário
taverneiro da região. Na verdade, Manuel is alive and can be found nas grandes
avenidas da capital paying violin to the passerbys a bordo do seu triciclo
motorizado. As pessoas que gostam de o ouvir depositam moedas no porta bagagens
do sua motorizada, and Manuel says thanks with the same enigmatic
words of ever «O soldo que acaba de depositar aos pés do desalmado ponta de
lança faz crescer castelos de areia nas nalgas reformuladas por critérios
subjacentes»." by carmen e ufus